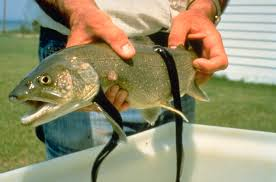 This week of Aquatic Invasive Species Awareness is a joint project of the Michigan Departments of Environmental Quality, Natural Resources and Agriculture and Rural Development. The state workers have also enlisted some volunteers to help in the effort.

The focus of the effort is on boaters and fishermen, who are reminded to take the following actions, which are now not just a good idea, but the law:

Dispose of unused bait in trash receptacles. Do not put unused bait into the water. (Bait shops have been criticized for introducing non-native species into the waterways during previous investigations.)
Clean out all aquatic plant and animal life from your boats prior to leaving boat landings.
Drain all water from your boat at the landing site, as these can contain visible as well as microscopic organisms. Pay attention to drains, wells or bilge water receptacles.
Clear off all components of your boat of plant and animal life, including covers, trailers and flotation devices. Again, do this at the access site.
If you decide to throw a fish back, return it to the waters that you caught it from.
In addition to the above regulations, state officials are urging boaters and fisherman to thoroughly clean and dry all areas of boats as well as all boating and fishing supplies prior to placing them in Michigan lakes and rivers. Ideally, a boat should be dry for five days before being launched. Officials are particularly concerned with boats and equipment that have been outside of Michigan, which may have picked up small plants or organisms, even the eggs of hatching organisms.

Michigan officials are urging everybody who enjoys Michigan’s many lakes and rivers to try to keep these aquatic invasive species “at bay”.