The latest substance to be banned due to environmental concerns: microbeads. These tiny pieces of plastic are used in multiple personal cleaning and exfoliant products and often as embellishments in nail polish. They are most typically found in face cleansers and body soap. While they don’t seem as hazardous as other types of toxic waste, the microbeads are washed down the drains in showers and sinks and subsequently enter water treatment systems, where they are reportedly quite resistant and don’t break down further. 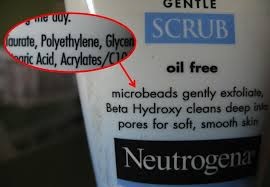 The microbeads are becoming another component of the world’s plastic pollution glut, and they are affecting the Great Lakes. Scientists are concerned not only with the amount of plastic that the microbeads are adding to the world’s oceans and freshwater sources, but also with the size of the beads. They resemble fish eggs in shape and size and are being consumed by species, which then also consume any toxins within the microbeads. The extent to which species are ingesting the microbeads is still being studied. There is some anecdotal evidence of plastic within the digestive systems of  lake perch.

Other states are also in the process of passing legislation. At this point, microbeads are not being targeted by the Environmental Protection Agency, only by states.

Concerned consumers should examine any products that they suspect have microbeads now. The ingredients polyethylene and polyproypelene are plastics. Sometimes a product will even tout that they contain microbeads. Large cosmetics companies are aware of the ban and are developing alternatives like bits of cocoa beans, or even apricot seeds or sand to supplant the use of the plastic microbeads.  Certain exfoliants on the market already use organic materials for expfoliating, like walnut husks or oatmeal.