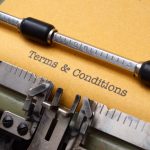 Setting the stage: You are about to enter into a contract and want to make sure the other party, in a year or two, does not attempt to claim that the terms of the contract have changed because of something said by one of your managers, officers or employees.

Taking action: So, you put an anti-modification and anti-waiver clause into your contract that states “this contract may be modified or amended only by a written document signed by the parties.”

The dispute: A few years later, you end up in a contract dispute with the other party, who claims that the requirements for performance under the contract have been changed by one of your managers in a way different than what the contract called for. You pull out your contract, see the anti-modification and anti-waiver provision which states that the terms cannot be modified except by a signed writing, and feel reassured that the other party does not have a legal leg to stand on. You feel certain that you are protected against the assertion that the terms of the contract have changed despite the actions of your manager. Are you in fact protected?  Maybe not.

Why could I not be protected? For several years, Michigan courts have found that such an anti-modification and anti-waiver clause, by itself, does not always protect against oral modifications of the agreement. In Quality Products & Concepts Co. v. Nagel Precision, Inc., 469 Mich 362; 666 NW2d 251 (2003), the Michigan Supreme Court held that parties to a contract are free to mutually waive or modify their contract notwithstanding an existing anti-modification and anti-waiver clause, based on the principle that parties should have the freedom to contract.

However, the Court in Quality Products made it clear that before any waiver or modification could be found to exist under such circumstances, there must be clear and convincing evidence of a mutual intent and agreement (even if oral) to waive the anti-modification provision itself, in addition to the substantive provisions of the contract that the one party claims has been modified. The Court elaborated that such clear and convincing evidence of an intent to waive the anti-modification clause is not ordinarily found by a course of conduct alone (i.e. conduct that is inconsistent with the terms of the contract), but also generally requires evidence of a subsequent oral agreement to such waiver.

How do I make sure I’m protected? How does one strengthen the anti-modification protections in a contract so that an offhand verbal statement by an employee does not result in a modification of the carefully crafted legal rights and obligations in the written agreement? The answer is to limit the number of persons having authority to modify the contract.

While the mere existence of a written anti-modification clause, standing alone, may not be able to completely prevent the oral amendment of a contract, one may supplement such a clause by selectively granting authority to authorize a modification to only a specific individual or officer-holder.  A clause in a contract that provides “any modifications must be approved by the president of the company,” for example, will render ineffective and unenforceable the alleged contract modification based on a verbal statement by someone else in the company. When the parties make it clear that only a specific individual has the authority to change contract terms, statements by others without such power clearly may not be relied upon. In such circumstances, Michigan courts have rejected claims of alleged contract modification when such contract modification was not approved by the person with the sole authority to make the change.  See, for example, Pepperman v Auto Club of Michigan Ins Group, 181 Mich App 519; 450 NW2d 66 (1989).

Do you have additional questions on how a situation like this may impact your business? Please contact John Mucha at jmucha@dmms.com.