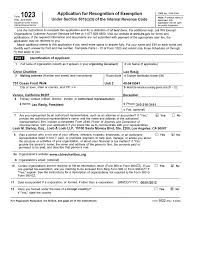 The Internal Revenue Service rolled out a new, shorter application form for charities that are applying for 501(c)(3) status. The form, which was published in July of 2014, appears to be a useful tool for nascent groups that wish to establish their non-profit status.

Not all charitable entities are eligible to use the 1023-EZ, but many are. The essential qualifications have to do with the size of the applying institution. The enterprise cannot have more than $250,000 in assets and must have gross receipts of $50,000 or less. In the past, the IRS did not distinguish between large non-profits and start-ups. All were required to utilize the complex Form 1023.

The IRS still has a backlog of applicants from the original Form 1023 (reportedly more than 60,000 applications are awaiting IRS action). The IRS is hopeful that fewer resources on their end will be needed as smaller charities utilize the more user-friendly form. Since the rollout of the 1023-EZ option, 45% of the 501(c)(3) applicants are utilizing Form 1023-EZ. The IRS expects that the approval process for applicants utilizing Form 1023-EZ will be under 90 days, with many taking significantly less time. Since the form has been introduced, the average backlog has diminished for all 501(c)(3) applicants (using both forms) from 270 days to 200 days.

Jeffrey Moss, Dawda Mann attorney, notes “We have had several new organizations form and take advantage of this new streamlined process. It is a great systematic improvement for smaller or newer charities.”