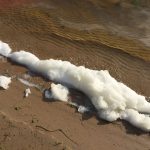 You have probably heard many concerns being raised about something called PFAS. PFAS stands for per- and polyfluoroalkyl substances, which are a group of widely used compounds that have been used in everything from non-stick pots and pans to firefighting foam.  They have also been used for furniture, carpeting and clothing to give those products a spill-resistant, water repellant quality.  Their large molecular compounds and their structure not only provides the non-stick, foaming and water repellant properties that are useful to humans, it also makes them very stable and resistant to breakdown, either by nature or human processes.  This is why they are called “forever chemicals” and makes them potentially dangerous because they have a tendency to bioaccumulate, or build up in the food chain.

What you probably have not heard of is PFAS’ relationship to Major League Baseball.  The Detroit Free Press recently reported that a number of professional baseball players were potentially exposed to PFAS-impacted drinking water when they played with the West Michigan White Caps in Grand Rapids.

According to the Detroit Free Press, a number of baseball players, including Detroit Tiger Nicholas Castellanos, were potentially exposed to PFAS while staying with a host family in Grand Rapids whose drinking water well has been contaminated by a former shoe factory owned by Wolverine Worldwide.

Should these players be concerned?  It’s really an open issue.  PFAS compounds have received close scrutiny lately because of their bioaccumulative properties and certain studies that have linked high concentrations of the compounds to problems observed in laboratory test animals.  However, there is no consensus as of yet as to whether there is a safe limit.  Also, the baseball players stayed with the family short periods of time.

The U.S. EPA has set a drinking water standard of 70 parts per trillion (ppt). One ppt is the equivalent of one drop of substance in 20,000 swimming pools.

However, there is some question as to whether or not the U.S. EPA’s level is adequately protective of human health.  For example, Michigan’s PFAS Science Advisory Panel assessed PFAS and its related compounds in its December 7, 2018 report.  In that report, the Panel concluded that “if one accepts the probable links between PFOA exposure and adverse health effects detected in the epidemiological literature as critical effects for health risk assessment, then 70 ppt in drinking water might not be sufficiently protective for PFOA.”

Some states have taken a more restrictive approach.  New Jersey has a drinking water standard of 13 ppt for PFNA and a proposed regulation of 14 ppt for PFOA.  California, on the other hand, has a combined PFOA and PFOS limit of 70 ppt with notification levels for PFOA at 14 ppt and PFOS at 13 ppt.

Michigan has cleanup standards for PFOA and PFOS but no established drinking water standard.  The residential and non-residential drinking water clean-up standard for groundwater is 0.07 parts per billion (ppb), or 70 ppt.  The groundwater/surface water interface criteria (GSI) is 0.12 ppb, or 12 ppt for PFOS.  Up until recently, Michigan has relied on the EPA standard of 70 ppt for PFOA and PFOS combined; however, Michigan has recently started a rule-making process for PFAS compounds in drinking water, and it is expected that the final rule will be much lower than this.

Most likely, Michigan will adopt a drinking water standard similar to the health screening levels established by the Michigan Department of Health and Human Services.  Those levels are 9 ppt for PFOA, 8 ppt for PFOS, 9 ppt for PFNA, 84 ppt for PFHxS and 1,000 ppt for PFBS. In addition, Michigan has recently cautioned Michigan residents from touching foamy water near sites that have been contaminated with PFAS compounds.

Michigan has a new rulemaking process and the PFAS rulemaking will be one of the first to go through this process.  Even if rules are established, they could be challenged because Michigan has a new law (MCL 24.232(9)) that prohibits rules that are more stringent than a federally established level unless it can be established that there is a clear and convincing need to exceed the federal level.  Since the Federal Government has not formally adopted a standard for PFAS, this may not be an issue, however, given the stakes involved, there is a possibility that some interested party could challenge it.  Whatever level (or levels) the State arrives at, you should expect even more scrutiny of PFAS issues around the State.