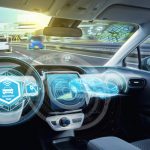 On Thursday, March 22nd, Ryan Olson and I attended the Canadian Auto Innovation Summit in Detroit.  The event was a way for Canadian universities and research organizations to showcase their expertise, talent, and strategic partnerships with industry, as well as show the ongoing support and commitment from the Canadian government to further development in the high-tech automotive sector.  With the auto industry moving to the next frontier with autonomous vehicles, the importance of a solid working relationship between American and Canadian companies is more important than ever.  With NAFTA negotiations being the hot topic today, Douglas George, Consul General of Canada in Detroit, focused on the importance of past working relationships between American and Canadian organizations and highlighted the importance of maintaining these relationships moving forward.  Sandy K. Baruah, President and CEO of the Detroit Regional Chamber, echoed the Consul General’s message by furthering the point that regardless of where NAFTA ends up, it is up to the private sector to ensure the mutually beneficial relationship between the U.S. and Canada continues to thrive.

Many Canadian Universities spoke of their research in the realm of autonomous vehicles and their willingness to share their data to help drive innovation.  The University of Waterloo is currently the only University able to conduct on road testing and has shown great strides with their research.  Sharing data and partnering with research institutions is the type of willingness that will ensure manufacturers produce the highest caliber and safest autonomous vehicles for the public.  The recent news of the Uber vehicle striking and killing a pedestrian inevitably arose.  Dr. Ziad Kobti from the University of Windsor brought up the great point that we are expecting these vehicles to drive better than humans because as we all know; pedestrians are struck by vehicles every day.  Unfortunate accidents and temporary setbacks aside, research in the autonomous vehicle space will likely continue with the intention and goal to produce smarter and safer vehicles.  Approximately 30,000 people were killed in automobile accidents last year in North America alone; and autonomous vehicles have the potential to drastically minimize this number and save thousands of lives each year.

Raed Kadri of the Ontario Centres of Excellence dove deep into the Ontario government’s robust drive to invest in the auto industry.  In early November of 2017, the Ontario government launched the Autonomous Vehicle Innovation Network (AVIN) with an investment of $80 million over five years.  AVIN acts as a focal point to help coordinate industry, academia, research organizations and governments, as well as other interested stakeholders in the connected and autonomous vehicle technology space. AVIN also provides programs that support the development of leading edge technologies by small and medium sized enterprises and post-secondary institutions in Ontario.  This cross investment of the Ontario government and industry shows the progress being made to develop the best connected and autonomous vehicles for consumers.  Mr. Kadri further outlined the work of Ontario Centres of Excellence in connecting small and medium sized automotive entities with large suppliers and manufacturers to promote and sustain organic economic growth.

This type of cooperation incentivizes cross-border relationships between companies and governments alike for the growth of an ever expanding high-tech auto industry.  If you have any questions or would like to discuss how your company could benefit from these cross border investments, feel free to reach out to Dawda Mann anytime.