What is the Mackinac Bridge Authority (and what does it have to do with a pipeline)?

Home/Environmental Law/What is the Mackinac Bridge Authority (and what does it have to do with a pipeline)?

What is the Mackinac Bridge Authority (and what does it have to do with a pipeline)? 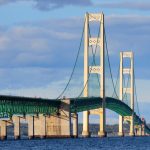 Almost simultaneously with the new appointments to the Bridge Authority, the Governor announced that an agreement had been reached between the State of Michigan and Enbridge Energy. The Tunnel Agreement culminates extended negotiations regarding the future of “Line 5” within the “Straits of Mackinac.” The Agreement allows Enbridge Energy to continue the use of Line 5 for the transport of light crude oil and natural gas fluids. The focus of the Agreement is on the 4.09 miles of parallel pipelines that lie below the Mackinac Straits, which are used to transport fluids within a much longer pipeline system operated by Enbridge.

The Agreement contemplates that in the future Enbridge will use a horizontal directional drilling machine to create a tunnel that will encase a single larger pipeline for future transport of light oils and natural gas liquids. The Agreement requires Enbridge to cover the cost of design and construction of the pipeline and then Enbridge will decommission the older Line 5 parallel pipelines. The cost of this project is projected to be $350 to $500 Million.

In the interim, Senate Republicans have introduced legislation to expand the role of the Mackinac Bridge Authority, which would ultimately own and operate the Straits Tunnel to be constructed by Enbridge.

If the Bridge Authority rejects taking on this new role of ownership and oversight, many questions remain as to how this would impact the original Tunnel Agreement and whether this would allow Enbridge Energy to continue its transport of oils and gas through the older, lesser protective Line 5 pipelines.