Everything You Need to Know About Michigan Employment Arbitration Agreements

Everything You Need to Know About Michigan Employment Arbitration Agreements 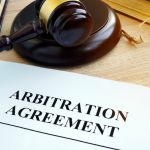 Given the length, formality, and cost of litigation, employers are turning to arbitration to resolve disputes. Arbitration is a private process with a neutral third party as the decision maker. Employees also find the process advantageous, as it provides a more accessible way to address issues with an employer.

When interpreting an arbitration agreement, the same legal principles that govern contract interpretation apply. Therefore, it is important that the language of the agreement represents intent of the parties.

Arbitrations are administered through organizations such as the American Arbitration Association (“AAA”) or JAMS, which also have its own rules and procedures.

Keep in mind that if arbitrating according to the AAA Commercial Arbitration Rules, the arbitrator may make the initial determination of substantive issues.

When Dealing with Enforcement Issues, Who Carries the Burden?

Who Can Be Required to Arbitrate?

However, since arbitration is a matter of contract, Michigan Courts recognize five contract principles that bind a nonparty to an arbitration agreement:

If you would like help navigating Michigan employment arbitration agreements, our team is happy to assist. Send us a message now.

By admin@dawdamann|2022-01-11T09:54:42-05:00October 9, 2018|Categories: Business World, Employment Law|Comments Off on Everything You Need to Know About Michigan Employment Arbitration Agreements